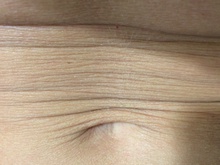 The skin on our body that forces us to identify it as "crepey".  Crepey skin is something we all seem to find at some point on our bodies, albeit after childbirth, losing a lot of weight, or the inevitable age, sag thing.  Plastic surgery is the obvious option that many prefer, for optimal results.  Though if you are at the in between stage or age of not wanting surgery but interested in taking care of the crepiness that seems to linger in your thoughts, read on.

Technology seems to be defying all odds with more and more advacnes in this department.  Currently there are several viable options for resolving the texture and extra skin that you are aggravated by.  There are lasers that can be applied to your skin that with continued use will reduce up to 20% of unwanted loose skin, that is called Skin Tyte, it is the least invasive and only slightly uncomfortable, feels like a sunburn.  The next option is the most popular, it is called precision tx for the neck and face and laser liposuction for other areas of the body.  Now for crepey skin you will not need the liposuction portion of the procedure but Dr. Capuano will use the skin tightening portion for you, where it will go under the dermis of the skin at much higher temperatures than anything topical for the best skin tightening procedure short of going under the knife.  This is a minimally invasive procedure, that is done here in our office under local sedation.  The other option that is becoming popular and the effects are measurable, but it is quite uncomfortable, would be an RFA (radio frquency ablation).  This is another topical soultion whose technology is rapidly advancing.